We only see our reflection.

We often consider those with autism to have some fault with theory of mind. Theory of mind is the kind of empathy where we can imagine what another person’s perspectives and experiences are like. This article is going to provide a social explanation for the social problems that individuals labeled with autism face. This may not apply to everyone with autism, but we must recognize this as a possibility that exists. Consider the association of prosopagnosia (face-blindness) and autism spectrum disorders. This link may be due to the consequences of face-blindness on social development, through altering the behavior of other people. If you do not recognize other people, this has social consequences like negative or painful feedback and this may dis-incentivize social interaction. This is more true for interacting with same-age peers. The reduced social interaction may result in cumulative problems with relating to others. Consider this idea as we explore ideas about theory of mind.

Interesting new study: Those with autism may have better social skills than non-autistic individuals.

First it is important to consider that a failure to correctly use theory of mind is a common occurrence. Notice how people tend to interact in the face of conflicting viewpoints. We often dehumanize or objectify those who hold different perspectives than ourselves. Politics is a clear example of this, where we often strawman the other side, which is almost like the opposite of theory of mind. We stereotype people from our outgroup and misperceive their intentions, behaviors, and thoughts. Ingroup and outgroup biases can change how we empathize with others’ pain and even alter contagious yawning. These biases change how we interpret those who we perceive as ‘different’ from us by forming a confirmation bias that more differences exist between ourselves and the outsider than really do, sometimes even tending to focus entirely on differences while ignoring similarities altogether. With an outgroup individual we may often mercilessly focus on how a person is strange while when we observe strange behaviors with an in-group individual we may dismiss or justify it as less drastic.

A common example where this pattern occurs in mental health is with the diagnosis of schizophrenia. You could test this out yourself. Approach someone in public and claim that you have schizophrenia and then proceed to have a normal conversation with them. It might go well, but it’s easy to imagine they will be looking for signs of incompetency or strange behavior, manifesting into an awkward social interaction regardless of how normal you try to act. One famous experiment known as the Rosenhan experiment showcased this phenomenon quite well. In this experiment, a Stanford professor and his team learned to feign symptoms of schizophrenia in order to get admitted as patients to psychiatric hospitals. After being admitted, all of them began to act normally. None of the patients were found to be mentally healthy or imposters during the experiment. They all had lasting diagnoses of psychotic disorders, labeled as ‘in remission’. The researchers reported disturbing social and living conditions during their time at these hospitals.

Taken from the Wikipedia entry:

“Rosenhan and the other pseudopatients reported an overwhelming sense of dehumanization, severe invasion of privacy, and boredom while hospitalized. Their possessions were searched randomly, and they were sometimes observed while using the toilet. They reported that though the staff seemed to be well-meaning, they generally objectified and dehumanized the patients, often discussing patients at length in their presence as though they were not there, and avoiding direct interaction with patients except as strictly necessary to perform official duties. Some attendants were prone to verbal and physical abuse of patients when other staff were not present.”

It’s important to remember that the researchers were not acting schizophrenic, yet all of these things still occurred. These represent a serious failure of normal individuals’ theory of mind based on the stereotypes commonly associated with the assigned identity of the pseudopatients. Fascinatingly, one could argue that the hospital workers were in some sort of delusional or even socially-autistic state.

Is theory of mind mostly projection?

Theory of mind is not about understanding and empathizing with the psychological differences of others, but rather it is about relating to the psychological overlap that others have with us, eventually developing into a skill of relating to increasing levels of difference by abstracting them from our own experiences. This is shown by how we find it easier to imagine the perspective of a human compared to a dog. This becomes increasingly apparent the further from human you go, regardless of whether the organism’s perspective is simple or not. We cannot imagine the perspective of a clam, which undoubtedly has a simpler perspective than a human does, if it has any perspective at all. Likewise, we find it easier to relate and understand the perspective of a dog much more than a clam. Theory of mind is about recognizing patterns of similarity between ourselves and another and so those who are neurodivergent are defined by their dissimilarity to what is considered psychologically normal which should inherently predispose those who are neurodiverse to receiving less theory of mind from neurotypicals. 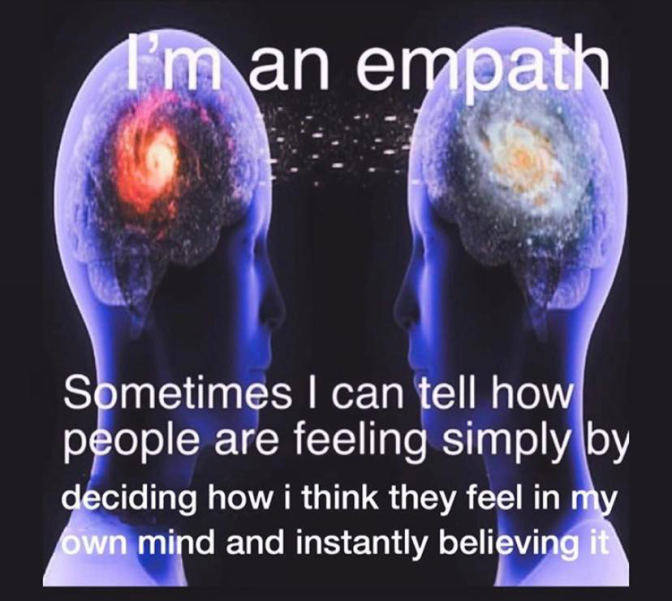 If these sorts of identity biases shape how we view people labeled as schizophrenic, then there is likely stereotypes that influence how we view those labeled as autistic as well. Even before the labeling occurs, the pure strangeness of behavior in these individuals may have us subconsciously labeling them as different or weird. An individual with autism may have neurodivergent traits such as sensory hypersensitivity which would change the individual’s reaction to stimuli. This difference in reaction will lead to others noticing the difference in behavior, labeling the individual as different, and then ultimately treating them differently than they treat those who react to the stimuli more similarly to themselves. Although we often characterize autism as involving deficits to theory of mind, it is clear that the general population also struggles to engage in theory of mind towards individual’s with autism or any other form of neurodiversity. The autistic individual lives in a world that is perpetually deficient of other people’s theory of mind and empathy.

The autistic individual therefore grows up in an entirely different social environment than neurotypical children at least partly due to their difference in sensitivities and behaviors. Growing up in a different social environment will cause the child to develop differently from others while most of the neurotypicals will exist in a relatively mimetic social environment where they are having similar experiences and adapting to the herd. Social norms, memes, and culture are not stagnant but rather, dynamic and evolving from childhood and into adulthood. The rules that we are expected to conform to change as we grow older. Individuals with autism may be continuously disengaged with culture because of the exclusion that occurs in response to their abnormal behaviors and sensitivities. The effects of being excluded from the group will have a cumulative effect because development and cultural evolution both are cumulative.

Catching up to their peers may prove to be an extremely difficult task, even if the individual gains constant access to an accepting and open-minded social group later in life. It would be like struggling to learn 3rd grade math because you kept skipping class in fear of the teacher targeting you with painful criticisms and then suddenly getting dropped in a college level math class with a less critical teacher. You wouldn’t suddenly gain an intuitive ability to do all of the math you missed out on over the course of years. Math is cumulative much like social skills are.

Some research shows that autistic individuals are more lonely than others. Even worse, loneliness seems to be a self-perpetuating phenomenon. Those with autism often develop social anxiety, which has been linked to misperceiving neutral faces as threatening. Social isolation was also linked to brain activity abnormalities and was found to increase tachykinins in mice, leading to aggression and threat behaviors. Tachykinins were also found to play a role in autism and antagonists of tachykinins may help individuals with autism. So it could be that individuals with autism misperceive things like aggression where there isn’t.

This brings us to the idea of social defeat, which is defined (by Wikipedia) as any kind of hostile dispute including aggression, chronic subordination, bullying, and humiliation. I’ve written about social defeat often in posts like AntiNarcissism, Nexus, and others so it’s no surprise that we return to this topic yet again. One could wonder,

By this I mean that individuals with autism may either be born with mental states similar to those who are socially defeated, or have a high proneness to experience immediate social defeat based on subtle behavioral differences that cause others to reject, bully, exclude or subordinate. This post has mostly discussed the second case, but perhaps in future posts we will explore whether the autism-linked genes may link to mammalian subordination patterns.

While some individuals labeled with autism may have some sort of inherent social deficit, it is worth considering whether many others face early life exclusion or if the majority of their social issues are an effect of subtle social exclusionary effects that accumulate deficits during the developmental phase of their lives. Even if there are some inherent social differences rather than purely secondary neurological differences, the effects of recurring social exclusion would undoubtedly cause a vast amount of the social problems that autistic individuals face. If this were found to be true, aiding autistic individuals in their social development might rescue a lot of their social abilities.

This article leans in the direction of models such as the Social Motivation Theory of Autism with the slight addition that perhaps the lack of social motivation could be explained by the lack of incentive caused by their difference in treatment and dysphoric prior social interactions. In essence, the exclusion or stigma due to subtle nonconforming behavior may demotivate social engagement and promote isolation.

It’s worth noting that this isn’t only a problem with those labeled with autism, but in fact reveals an ubiquitous issue prevailing in mental health conceptualizations, as shown in the case of the Rosenhan Experiment. It is probable that many professionals are personally aware of these dynamics, but it doesn’t seem clear that the issue is publicly addressed as much as it should since it would have drastic implications to the outcome of people’s lives. This extends far beyond just mental health and gets into stereotypes and identity labels in general. We may even find that our culture detects certain psychological or even physical phenotypes and assigns them characteristics that begin to manifest as a self- and culturally-enforced-fulfilling prophecy.

If you’d like to support my projects check out this page.

2 thoughts on “Theory Of Mind”